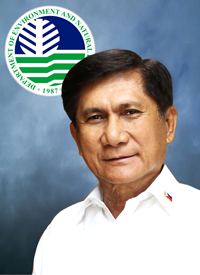 A native of Bangui, Ilocos Norte, Secretary Roy A. Cimatu is a graduate of the public school system from elementary up to high school, and graduated from the Philippine Military Academy in the class of 1970.

His eagerness to learn made him attain more scholastic achievements. This includes graduating from the Infantry Officers Advanced Course in the Philippine Army Training Command where he topped the course with a rating of 97.27%, an academic record which remains unsurpassed in the college history. He also graduated from the United States Army Command and Staff College in Fort Leavenworth, Kansas, USA.

He also furthered his education with a degree in Master in Business Administration from the Ateneo Graduate School of Business. A skilled pilot of a helicopter and a fixed-wing aircraft, he was also a recipient of the Cavalier Award from the Philippine Military Academy Alumni Association and a Hall of Fame from the United States Command and General Staff college.

All these academic accolades can be attributed to both his parents who are both teachers by profession.
Being a Second Lieutenant, he was assigned as Company Commander in Patikul, Sulu during the Armed Forces of the Philippines (AFP) attack against the Moro National Liberation Front (MNLF) under its founding chairman Nur Misuari.

In the 80s, meanwhile, he was sent to Northern Panay as Batallion Commander in Aklan, a place under the heavy influence of the New People’s Army (NPA). The vicinity is a highway of the northern towns, especially in Ibajay, Aklan, which was heavily infested by the NPA. The same highway was a gateway to the present-day Boracay Island, to which his successful efforts to clear the area from threats led to the development of the top tourist destination spot in the country today.

His victories in the battlefield eventually led him to earn his second star and be awarded as the Distinguished Conduct Star, the second highest combat award, next only to the Medal of Valor. He then became Southcom Commander based in Zamboanga City as a four-star General.
Secretary Cimatu’s ultimate recognition, however, is when he was appointed as the 29th Chief of Staff of the Armed Forces of the Philippines in May 2002.

In his career as a civil servant, Cimatu was called again to serve the country when he was named as a Special Presidential Envoy to the Middle East with the rank of Ambassador. At the height of the US-Iraq war, his Middle East Preparedness Committee made sure that no overseas Filipino worker (OFW) was hurt, killed or displaced from employment because of the conflict. He was able to negotiate a successful release of a Filipino hostage named Angelo dela Cruz, who was kidnapped by Iraqi militants in Baghdad, Iraq in 2004. Cimatu received a Presidential Award because of his bravery and perspicacity as a strategist for the triumphant negotiation.

Following dela Cruz’s freedom, Cimatu was also involved in the successful release of Filipino seamen held hostage in Somalia. His inherent wisdom and competence as a caretaker of OFWs led him to be reappointed as a Presidential Special Envoy to the Middle East by President Rodrigo Duterte, and joined him recently to the successful visit of Middle East this month.

And now, he is appointed by President Duterte to serve as the Department of Environment and Natural Resources’ (DENR) 16th secretary since the agency re-organized in 1987 by virtue of Executive Order no. 192.