“The use of wildlife forensics is now being considered globally as an invaluable tool to combat illegal wildlife trafficking,” pagdidiin pa ni Cimatu.

“When a wildlife sample arrives in the laboratory, the biologists can compare the DNA sequence and determine its conservation category,” saad pa ni Calderon. 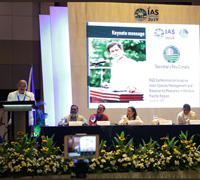 Environment Secretary Roy A. Cimatu has called on experts and researchers in the Asia-Pacific region to work together in coming up with research-based solutions that would reduce the negative impact of invasive alien species (IAS) to biodiversity and the environment in general.

“I stand firm in promoting convergence of our research and development (R&D) efforts for a sustainable region-wide management of (IAS),” Cimatu said as he welcomed the delegates to the international conference on IAS management that took place in Manila from July 9 to 11.

“Let us continue with our pursuit for research-driven strategies and policies to effectively manage and conserve biodiversity for the good of humankind,” he added.

The three-day event called “IAS Conference 2019” has brought together IAS experts, researchers, dialogue partners, environment managers and other stakeholders from the Asia-Pacific region.

In his keynote speech read by DENR OIC Assistant Secretary for Staff Bureaus and concurrent Biodiversity Management Bureau (BMB) Director Ricardo Calderon, Cimatu underscored the need for a collective effort to tackle IAS that has been “invading and destroying nature’s ecological balance.”

“These IAS pose serious environmental concerns and are among the major threats to biodiversity,” Cimatu pointed out. “They cover a wide gamut of ecosystems from the terrestrial to aquatic environments, irreversibly impacting on biodiversity, agriculture, as well as food and water security.”

IAS are plants, animals, pathogens and other organisms that are non-native to an ecosystem, and which may cause economic or environmental harm or adversely affect human health.

The International Union for Conservation of Nature defines IAS as species whose introduction and spread from their place of origin threaten biological diversity. They are the second biggest cause of biodiversity loss all over the world, next only to habitat destruction.

Except for Antartica and the glaciated Greenland, the IAS affected 17 percent of the global land area which are highly predisposed to their infestation.

These environmental villains are found in many countries in Asia and the Pacific, including the Philippines, assailing the region’s key terrestrial, wetland, coastal, marine and estuarine ecosystems.

In agriculture, the IAS broadly applies to any non-indigenous weeds, pest, insects and other disease-causing agents that disrupt crop and livestock, among others.

In the freshwater environment, one common invasive species is the carp that originated from Europe but has insidiously multiplied and is now found in almost all parts of the globe. This alien invader is classified as the most invasive in the world, damaging marine life.

Among the most infamous IAS in the Philippines are the American bullfrog and the golden apple snail or golden kuhol, which have displaced indigenous species in natural habitats.

The IAS conference was organized by the DENR’s Ecosystems Research and Development Bureau (ERDB) and funded by the Department of Foreign Affairs.

According to ERDB Director Sofio Quintana, the conference served as an avenue to the technical experts to verify the list of IAS, including their potential threats and impacts.

The eradication of IAS, he said, was in line with “Target 9 of the Aichi Biodiversity Targets under the Convention on Biological Diversity.”

Aside from the Philippines, other Asia-Pacific nations that presented their research papers during the conference were India, Malaysia, Pakistan, Trinidad and Tobago, United Arab Emirates, United States and Vietnam.

The Philippines was represented by experts from the DENR-BMB, University of the Philippines-Los Baños, ASEAN Center for Biodiversity, and Food and Agriculture Organization-Philippines, among others. #

“Let us continue with our pursuit for research-driven strategies and policies to effectively manage and conserve biodiversity for the good of humankind,” dagdag pa nito.

“These IAS pose serious environmental concerns and are among the major threats to biodiversity,” pagdidiin pa ni Cimatu. “They cover a wide gamut of ecosystems from the terrestrial to aquatic environments, irreversibly impacting on biodiversity, agriculture, as well as food and water security.”

Southeast Asia’s top forestry officials will gather in the Philippines this month for the 22nd ASEAN Senior Officials on Forestry (ASOF) Meeting that aims to strengthen regional forestry cooperation.

The meeting, slated for July 15 to 20 in Makati City and organized by the Forest Management Bureau (FMB) of the Department of Environment and Natural Resources (DENR), will bring together forestry leaders from the 10-member ASEAN to discuss measures toward sustainable forest management and addressing transboundary forest threats.

It also marks the start of the country’s year-long chairmanship of the biggest forestry conference and initiative in the region.

From July 15 to 16, the ASEAN Working Group on Forest Products will hold its 22nd meeting with focus on enhancing regional cooperation on forest products development and getting ASEAN countries align with global standards that address the environmental, social and economic integrity of regional forests and forest resources.

The meeting also supports the development of medicinal and aromatic plant industries, including their conservation and sustainable use.

The six-day ASOF event will end with an international seminar on current issues affecting forestry and forest products, which carries the theme: “Forestry Beyond Forests.”

The topics include Payment for Ecosystem Services (PES), ecotourism as a viable mechanism in sustaining biodiversity, and the benefits gained by forest communities from PES.

PES is an instrument designed to change practices of people that damage the environment so that they can provide valuable services to others and help improve environmental conditions.

In forestry, PES may involve entering into an arrangement with people or groups where they will be paid a certain amount to plant trees instead of cutting them down.  This gives them a source of income while they help increase forest cover.

Forests contribute to the achievement of multiple Sustainable Development Goals (SDG) set by the United Nations. These include SGD 6, Clean Water and Sanitation for all People; SGD 13, Climate Action; and SGD 15, Life on Land.

As of 2010, the Philippines’ total forest cover was estimated at 6.840 million hectares.

To increase the country’s forest cover, the government—by virtue of Executive Order 26—implemented the National Greening Program (NGP) which aimed to cover 1.5 million hectares of land with 1.5 billion trees from 2011 to 2016.

In 2015, EO 193 was issued extending the NGP until 2028 in a bid to rehabilitate the remaining unproductive, denuded and degraded forestlands estimated at 7.1 million hectares.

As of 2018, the DENR—together with other government agencies, private sector and other stakeholders—has rehabilitated 1.9 million hectares of denuded forestlands, employed over 600,00 people in upland communities and increased the country’s forest cover by as much as 28 percent through the NGP.