“We will not allow this river to die and we will relentlessly exhaust all means to bring it back to life, just as what we have successfully done in Boracay,” sabi pa ni Environment Secretary Cimatu.

“The system goes green and in full swing. I have no doubt we will succeed in the same way we succeeded in rehabilitating Boracay,” sabi ni Cimatu matapos ang paglagda sa MOA.

The Department of Environment and Natural Resources (DENR) has partnered with the provincial government of Compostela Valley (ComVal) for the intensified rehabilitation of the mine-waste contaminated Naboc River in Bgy. Mt Diwata, Compostela Valley.

Following the MOA signing, Environment Secretary Roy A. Cimatu said the river will be dredged and desilted after it has been heavily silted and poisoned due to irresponsible and abusive mining operations in the area. This will address pollution in the river and improve the flow of water on its channels.

“We will not allow this river to die and we will relentlessly exhaust all means to bring it back to life, just as what we have successfully done in Boracay,” said Environment Secretary Roy A. Cimatu.

“At the same time, never again shall we allow irresponsible mining operations to thrive in the area,” he said, adding that the rehabilitation of Naboc River is among his priority programs as DENR secretary.

According to Cimatu, for the past 25 years, the river has been the catchment basin of all toxic wastes coming from gold mining and human activities in Mt. Diwalwal. Years of abuse and misuse have resulted to the deterioration of the river’s water quality. It is now heavily poisoned by mercury and tainted by fecal coliform.

Naboc River originates from the uppermost slope of Mt. Diwata and traverses through the six barangays in the municipalities of Monkayo and Compostela – Babag, Mt. Diwata, Naboc, Tubo-Tubo, Upper Ulip and Mangyan.

Cimatu further said Mt. Diwalwal “has been the pet prey of man’s insatiable greed – the wanton and irresponsible mining activities in the area” for over two decades.

With the signing of the MOA, “the system goes green and in full swing,” said Cimatu. “I have no doubt we will succeed in the same way we succeeded in rehabilitating Boracay.”

In his 2017 State of the Nation Address, President Rodrigo Roa Duterte called upon lawmakers to visit the river in Diwalwal, in reference to Naboc River, whose waters he described as turning from pristine to black.

In response to this, Cimatu said, the DENR has crafted a plan of action to “once and for all address the problem.”

On orders of Cimatu, the Mines and Geosciences Bureau (MGB) has conducted a 500-meter sampling interval from Bgy. Diwata down to Bgy. Babag in Monkayo to assess and evaluate the condition of the river. Results confirmed that the whole stretch of the river has exceeded the standard level of mercury and fecal coliform.

The PTFNR has served 1,797 cease and desist orders (CDOs) to ball mills and carbon-in-pulp plant owners on March this year. It also undertook the “Lihok Alang sa Naboc” operation which aimed the immediate transfer of informal settlers and all processing plants from Mt. Diwata to Sitio Mabatas in Bgy. Upper Ulip in Monkayo to address Diwalwal’s environmental concerns.

Clean up, information, education and communication activities were also conducted in the area.

Cimatu thanked barangay officials in the area who have campaigned to clean Naboc River through solid waste management.

Under the MOA, DENR and the Compostela LGU commit to promote sustainable community development through the rational exploration, development, utilization and conservation of mineral resources in the river.

For its part, the DENR shall have supervisory authority in all activities over the course of the rehabilitation of the river and ensure strict adherence to all relevant environmental laws, rules and regulations and the rehabilitation Master Plan in collaboration with Department of Public Works and Highways.

It shall also conduct periodic monitoring of the river as Water Quality Management Area under Republic Act (RA) 9275 or the Philippine Clean Water Act of 2004 to evaluate the effects of the clean up on the river.

The MGB and the provincial local government shall also ensure that all sand and gravel materials, as well as metallic materials extracted from the river, pursuant to mining permits are disposed of in accordance with RA 7942 or the Philippine Mining Act of 1995, Department Administrative Order 2010-21 or the Revised Implementing Rules and Regulations of RA 7942, and relevant laws, rules and regulations. ### Environment Secretary Roy A. Cimatu has lauded the efforts of the Dynamic Art Group for organizing an art exhibit in support of the ongoing rehabilitation of the highly polluted Manila Bay.

The exhibit, which ran from June 18 to July 27 at The Gallery of Solaire Resort and Casino in Parañaque City, features paintings of the historic bay during its glory days or long before the government decided to place it on rehabilitation due to serious environmental degradation.

“Through this exhibit, we are reminded about the glory of Manila Bay back during the days so that we may focus on the goal of sustaining the same thing for the next generations,” Cimatu said.

DENR Undersecretary for Solid Waste Management and LGU Concerns Benny D. Antiporda, who delivered a speech during the opening of the exhibit, emphasized that cleaning Manila Bay also aims to clean the culture of the Filipino people.

“It is the next generation who will suffer with what we are doing, and that, we will not permit,” Antiporda said.

Paintings that are displayed in the exhibit include the Manila Bay Yacht Club with the famous Manila Bay sunset and a portrait of Secretary Cimatu.

In 2008, the Supreme Court issued a writ of continuing mandamus ordering the DENR and 12 other agencies to restore the waters of Manila Bay to Class SB level.

Class SB level classifies coastal and marine waters as safe for regular use by the public for activities such as bathing, swimming and skin diving. #

Cimatu tells ISFs along creeks: Pitch in to save Manila Bay, avail of gov’t relocation program 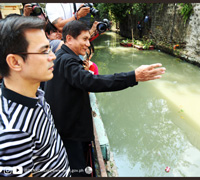 Environment Secretary Roy A. Cimatu has urged informal settler families (ISFs) living along waterways to do their share in the Manila Bay rehabilitation by availing themselves of the government’s relocation program.

Cimatu said the relocation of ISFs would hasten ongoing efforts to rehabilitate polluted creeks and other waterways that drain into the historic bay, which the government wants to become “swimmable” by December this year.

The environment chief made the appeal when he and Manila Mayor Francisco “Isko Moreno” Domagoso inspected last weekend an area along Estero de San Antonio Abad in Malate that used to be occupied by 50 ISFs.

The area has been cleared of illegal structures after 50 ISFs agreed to transfer to a relocation site administered by the National Housing Authority (NHA) in Caloocan City’s Tala district, leaving behind 20 ISFs residing along one of Manila’s filthiest esteros.

“We would like to appeal to the remaining 20 families to comply with the requirements of the NHA, so that we can already move them to their new location, to a better place. Hindi ritosaibabaw ng estero,” Cimatu said.

Cimatu noted the significant improvement in Estero de San Antonio Abad since majority of the 71 ISFs living along the creek have left and their houses demolished by the Department of Public Works and Highways.

He revealed that the fecal coliform level in the estero has “dramatically gone down.”

However, Cimatu said the cleanup efforts will continue until the coliform bacteria count reaches acceptable level.

The former military chief said the fences surrounding the creek will be removed to comply with the three-meter easement rule and allow more spaces for garbage trucks and people who would take part in the cleanup operations.

The DENR, he added, will continue to coordinate with the Manila city government for the rehabilitation of the Malate creek and other esteros leading to the Manila Bay. #

The Department of Environment and Natural Resources (DENR) is holding a national conference on the use of wildlife forensics as a tool to combat animal trafficking and other wildlife crimes.

The conference, which is being held in Mandaue City from July 16 to 18, brings together government personnel involved in the enforcement of wildlife laws to keep them abreast with the latest on wildlife forensics.

Wildlife forensics is the use of technology and science to support the investigation and prosecution of a wildlife crime.

It can be used to accurately identify suspected wildlife specimens, including illegal products such as pangolin scales or ground turtle meat in powder form.

According to DENR Secretary Roy A. Cimatu, the three-day conference aims to review the training design on wildlife forensics and criminal investigation for use in wildlife enforcement.

“The use of wildlife forensics is now being considered globally as an invaluable tool to combat illegal wildlife trafficking,” Cimatu pointed out.

DENR Assistant Secretary for Staff Bureaus and concurrent BMB Director Ricardo Calderon said his bureau has been working with the University of the Philippines-Institute of Biology on the application of wildlife forensics in the country.

He said the university has a program that established a reference collection of DNA barcodes of Philippine biodiversity.

“When a wildlife sample arrives in the laboratory, the biologists can compare the DNA sequence and determine its conservation category,” Calderon said.