Environment Secretary Roy A. Cimatu has called on Southeast Asia’s top forestry officials to strike a balance between preserving the region’s limited forest resources and meeting the needs of its growing population.

“We need to strike a balance between meeting the demands of the people and stability of the environment,” Cimatu stressed in his message delivered by DENR Undersecretary for Policy, Planning and International Affairs Jonas Leones during the 22nd meeting of ASEAN Senior Officials on Forestry (ASOF) held in Makati City on June 18.

Cimatu said that ASEAN forestry leaders “must transform into actions the strategic direction of sustainable forest management, competitiveness for foreign products, forest rectification, forest law and enforcement in government, and other forestry concerns.”

ASOF is a multinational body that aims to discuss policy matters, and formulate and implement regional cooperation activities and approaches in international and regional forestry fora.

Its basic objective is to formulate and implement regional cooperation activities to enhance the international competitiveness of ASEAN’s forestry products. It also aims to further strengthen the forestry arrangement in the region and joint positions in international fora.

According to Cimatu, forests are also integral to the pursuit of global sustainable development goals or SDGs, particularly SDG 6-Clean Water and Sanitation, SDG 13-Climate Action, and SDG 15-Life on Land.

SDGs are a collection of 17 global goals, each with a list of broad based and interdependent targets. The SDGs were set by the United Nations General Assembly in 2015 with 2030 as the target year.

“Forests will lead to the achievement of multiple SDGs, including poverty alleviation, food security, conservation and sustainable use of natural resources,” Cimatu pointed out.

“Accordingly, SDGs require stronger commitment to restore, protect, and promote sustainable management of forests and other terrestrial ecosystems,” he added.

Meanwhile, DENR Assistant Secretary for Staff Bureaus and concurrent Biodiversity Management Bureau Director Ricardo Calderon noted that while “ASEAN forestry continues to grow because of the integration and cooperation,” it is “somehow overshadowed by the growing concern on biodiversity conservation.”
Calderon said it should be emphasized that the forest provides a wide range of goods and services for the people and a major backbone as far as the economies of the ASEAN member-countries are concerned.

He likewise emphasized that deforestation and biodiversity loss in Southeast Asia is “a scenario which is not all discouraging,” as he expressed optimism for change and development in the future.

“This is a major challenge to ASOF, the ASOF leaders, and our dialogue partners to work harder and walk the extra mile towards achieving the strategic direction and action plans and operationalize these at a national level,” Calderon said. #

“Forests will lead to the achievement of multiple SDGs, including poverty alleviation, food security, conservation and sustainable use of natural resources,” pagdidiin pa ni Cimatu.

“This is a major challenge to ASOF, the ASOF leaders, and our dialogue partners to work harder and walk the extra mile towards achieving the strategic direction and action plans and operationalize these at a national level,” sabi ni Calderon. ### 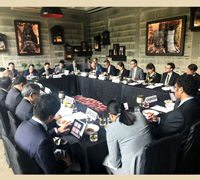 Happening on July 24-25 at The Peninsula Manila, the ASEAN Ministerial Roundtable Discussion on Clean Air, Health and Climate is co-hosted by the Philippine government—through the Department of Environment and Natural Resources (DENR)—together with the Association of Southeast Asian Nations (ASEAN) and the Climate and Clean Air Coalition of the United Nations.

DENR Secretary Roy A. Cimatu said the roundtable meeting will provide “a platform for an interactive discussion, in a high-level setup, on the opportunities and challenges of coming up with a regional approach to air pollution and climate change.”

The two-day event, he said, will also bring together experts and scientists in the ASEAN region and beyond to share local initiatives and insights toward global climate action, clean air and health that can simultaneously meet the goals of the landmark 2015 Paris climate agreement and the 2030 Agenda for Sustainable Development through the nationally determined contributions (NDCs) of each country.

During the event, ASEAN member-countries will be called upon to respond collectively to the Special Report on Global Warming 1.5°C published by the Inter-governmental Panel on Climate Change (IPCC) in October 2018.

The report emphasized the need for early action on all climate forcing emissions, including short-lived climate pollutants (SLCP) as part of the pathway to stay well below 2°C as agreed by the parties to the Paris accord.

In terms of air pollution and its effect on public health and development which many of the ASEAN countries still experience as a challenge, the “Air Pollution in Asia and the Pacific: Science-Based Solutions” report identified 25 clean air measures which if implemented across the region would result in 1 billion people enjoying clean air at the strictest ambient standards of the World Health Organization by 2030.

The event will commence in the morning of July 24 with the ASEAN Ministers Roundtable Discussion to be led by Secretary Cimatu, Health Secretary Francisco Duque and Secretary Emmanuel De Guzman of the Climate Change Commission.

A Senior Officials Workshop will proceed in the afternoon until the following day. It is comprised of four sessions marked with several presentations dealing with scientific studies and findings on the link between air pollution and climate change, clean air measures for Asia and the Pacific, benefits and tools for integrated action and SLCP mitigation, and initiatives on enhancing NDCs from select ASEAN member-states.

Outputs and results arising from the initial discussion are expected to prepare the region to collectively bring forth commitments and potential options to upscale climate actions during the UN Secretary-General’s Climate Action Summit in New York and in the 15th ASEAN Plus Three Environment Ministers Meeting, both in September this year.

The discussion is likewise expected to serve as an impetus for greater action and ambition on air pollution, health and climate that could significantly contribute to the High-Level Officials Meeting of the Asia-Pacific Regional Forum on Health and Environment. # 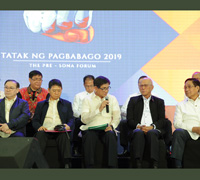 Environment Secretary Roy A. Cimatu has assured that there will be no letup in the fight against climate change and disaster risks as building resilient communities remains a top priority for the government.

As a way forward, Cimatu said the Duterte administration will continue to pursue policy reforms that integrate climate and disaster risk considerations into development policies, strategies, plans and programs.

Cimatu said the Department of Environment and Natural Resources (DENR) will continue to coordinate closely with other line agencies under the Cabinet Cluster on Climate Change Adaptation, Mitigation and Disaster Risk Reduction (CCAM-DRR) to ensure that they work together toward the goal of establishing adaptive and resilient communities.

Cimatu said the Cabinet cluster supports the creation of the Department of Disaster Resilience and other legislative proposals that promote disaster and climate resilience, such as the proposed National Land Use Act, Land Administration Reform Act, Integrated Coastal Management Act, and National Building Code of the Philippines.

“With the help of Congress, we intend to adopt a national land use policy that will optimize balanced development,” Cimatu said. “We hope to achieve this through rational and just allocation, utilization, management and development of our country’s land resources under the proposed National Land Use Act.”

This policy, he said, will be complemented by the planned delineation of forest limits, which would enable the DENR to sustainably manage, conserve and protect the country’s remaining forests from further depletion.

Cimatu said the cluster will work for the swift enactment of the Integrated Coastal Management Act, which would ensure optimum and sustainable resource utilization of coastal and marine environment.

He said the establishment of a department devoted to disaster resilience is necessary to help the government manage broader climate-disaster governance arrangements, and oversee the implementation of disaster risk and vulnerability reduction and management.

The cluster, according to Cimatu, also supports proposal to prohibit the conversion of irrigated lands as it would address the threats to the country’s food security.

He said that crucial to the government’s strategy was the proposed National Building Code of the Philippines, which aims to provide a framework for minimum standards and requirements for all buildings and structures so that government can regulate and control their location, site, construction, use, occupancy and maintenance.

At the same time, Cimatu said the government will provide the ability to generate, synthesize and disseminate knowledge, methodologies and decision-making tools to ensure climate resilience.

To cite an example, Cimatu said the DOST commits the installation of more than a dozen doppler weather radars and high frequency doppler radar networks in various parts of the country.

The DOST, he added, is also set to install several flood forecasting and warning systems in major river basins, a borehole seismic station in Kanlaon Volcano in Negros Island, and a probabilistic seismic hazard analysis in Metro Davao.

On the other hand, the DICT will implement programs on communications technology to prepare the communities and local government units in case of disasters.

Cimatu also revealed that the DOE will intensify development of renewable energy in off-grid areas for wider access of populace.

The government will continue to mainstream the use of alternative fuels and energy technology in the transport sector, as well as monitor the implementation of the Energy Efficiency and Conservation Act, Cimatu said.

To ensure quick restoration of energy services during and after calamities, Cimatu said the government will strengthen energy systems and facilities through the energy resiliency program.

He also said that the government will provide financial assistance for disaster mitigation, preparedness and rehabilitation of damaged electric cooperatives. #