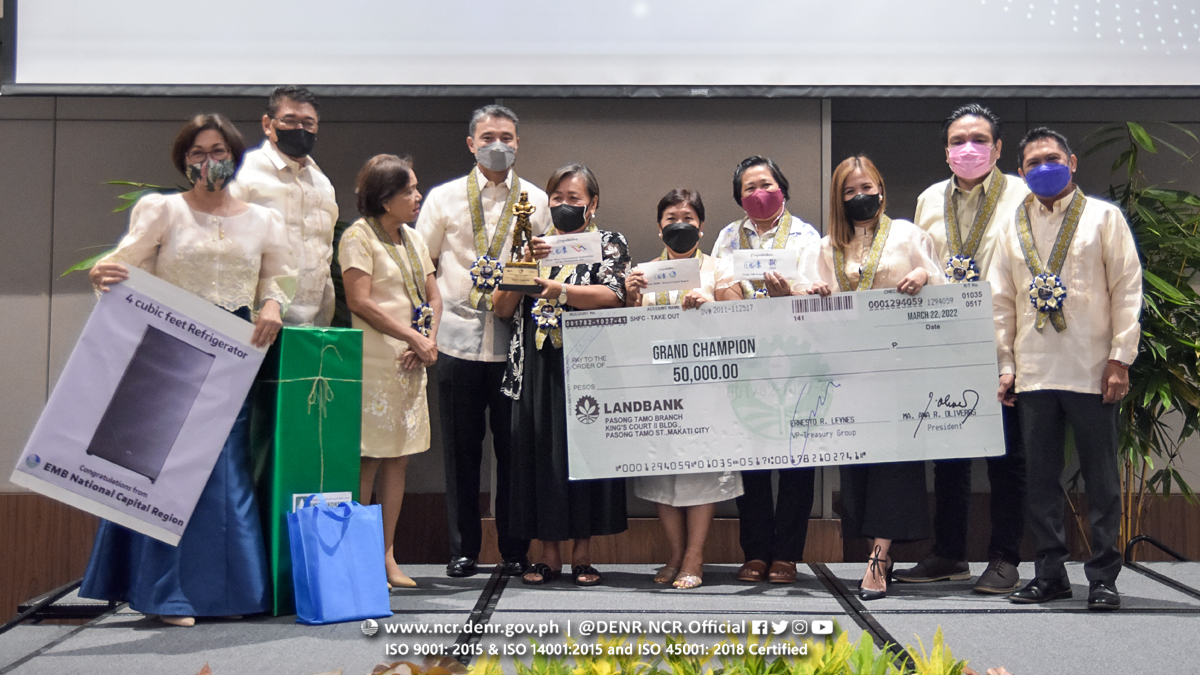 The Department of Environment and Natural Resources (DENR), through its National Capital Regional Office (DENR-NCR), was awarded the grand prize for being 2022’s “Most Improved Estero” to Estero de San Miguel in Manila during the Gawad Taga-Ilog 2.0 Awarding Ceremonies.

In his speech, DENR Acting Secretary Jim O. Sampulna commended the search and added that it should be “replicated in other regions, specially selected areas of the Manila Bay regions.”

“This should be done to recognize the efforts of local government units, partners, stakeholders, and communities in cleaning, restoring, and protecting our waterways,” Sampulna said in his speech delivered by Undersecretary for Field Operations - Luzon, Visayas, and Environment Atty. Juan Miguel Cuna.

The awarding ceremonies were held at the Park Inn by Radisson North EDSA on March 22, 2022, which is also in time for the celebration of World Water Day with the theme "Groundwater: Making the Invisible, Visible."

Aside from Estero de San Miguel, the winners also include the 1st Runner Up, which is Estero Tripa de Gallina from Pasay and Makati; the 2nd runner up is Park Creek 23 from Marikina; 3rd Runner Up from Polo River in Valenzuela, and the 4th Runner Up is Zapote River from Las Piñas.

Judges for Gawad Taga-Ilog 2.0 include DENR officials and partners who are professionals in the field of environmental protection, possess independence, which means being free of any loyalties, duties, or interests that might inappropriately influence the performance of a judge’s functions, manifest impartiality and have a sense of perspective.

For her part, DENR-NCR Regional Executive Director Jacqueline Caancan said that Gawad Taga- Ilog “was launched in 2020, not to promote competition but to inspire cooperation among our partner barangays.”

“Indeed, Gawad Taga-Ilog is built on the premise that Manila Bay is a watershed. All rivers and esteros within the watershed drain their waters—together with all the liquid and solid wastes from our households, offices, factories, etc.—to Manila Bay. Cleaning the historic water body, therefore, necessitates an integrated or ecosystem-based approach, from ridge to reef,” Caancan said.

Gawad Taga Ilog aims to recognize the efforts of local governments in Metro Manila—barangays in particular—in keeping their waterways clean and trash-free, as well as their active participation in the ongoing rehabilitation of the Manila Bay.

It also aims to encourage change in the attitude and outlook of Metro Manila residents on their role in keeping and maintaining waterways clean.

The second Gawad Taga-ilog—the search for the most improved estero in Metro Manila—was conceived out of necessity in November 2020.

In 2020, a total of 33 waterways were nominated, with three barangays emerging as winners, which include Barangays NBBS Dagat-dagatan and Bangkulasi in Navotas City for 2nd runner-up; Barangay Marikina Heights in Marikina City as the 1st runner-up; and Barangay Lingunan in Valenzuela City as the champion for the year. ###