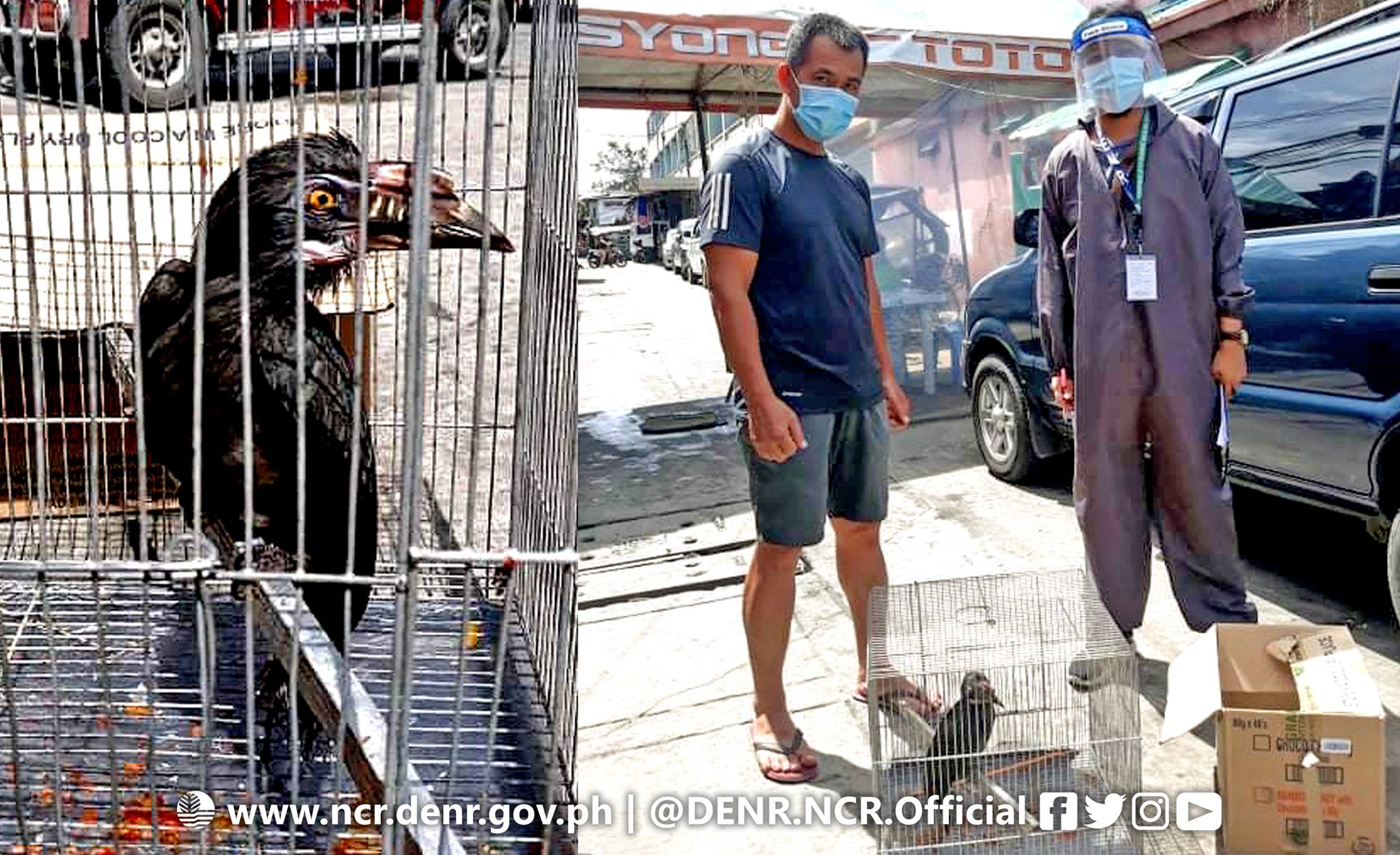 An informant reported the presence of the bird to the EFO which immediately dispatched a team for the retrieval operation. The team tracked the location of the bird in Barangay Malinao, Pasig City, and was able to retrieve it.

The Visayan tarictic hornbill is a type of bird found only in the Philippines—particularly in the islands of Negros, Panay, and Masbate.  It is listed as “Endangered” by the International Union for the Conservation of Nature’s (IUCN) Red List, while DENR Administrative Order No. 2019-09 puts it under the “Critically Endangered” category. Of the 55 recognized hornbill species in the world, eleven (11) are found only in the Philippines. Nine (9) of which, however, are in danger of going extinct due to habitat loss.

A subspecies of the bird—the Ticao hornbill (P. p. ticaensis)—was declared extinct in 2013 after it disappeared completely from the island with the same name. Apart from habitat loss, hornbills are victims of poaching and hunting as these birds are preferred by illegal wildlife keepers. The bird was brought to the Wildlife Rescue Center of DENR-Biodiversity Management Bureau in Quezon City for rehabilitation and possible release back in the wild. 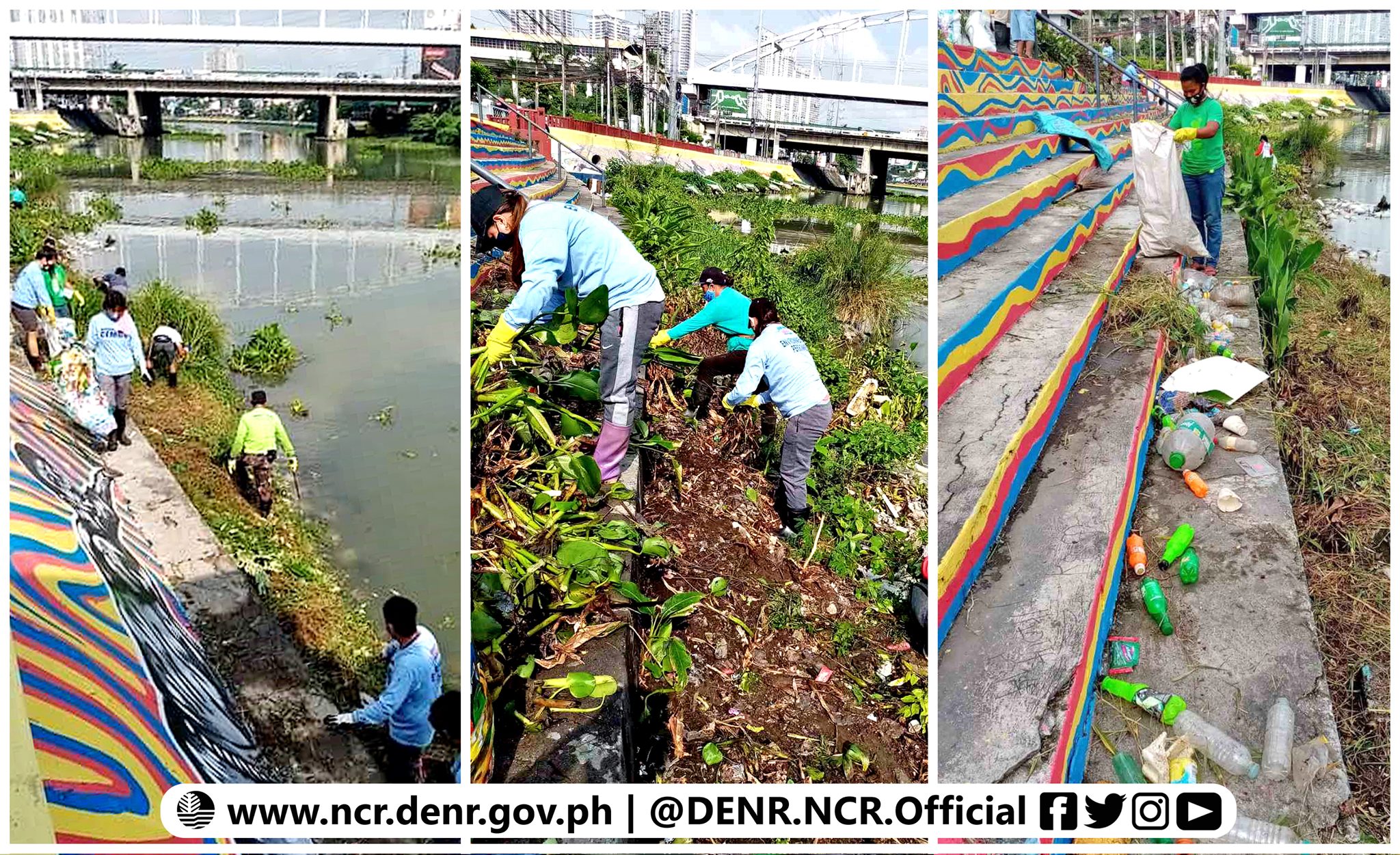 The Environmental Personnel of Barangay Cembo, Makati City, conducted a cleanup on the shores of Pasig River on Friday, 14 August 2020.

The activity, led by Kagawad Kalmi Agpay Boregas, was mostly participated by women. They were able to recover 25 sacks of wastes, mostly composed of discarded plastic food and beverage containers.

Pasig River is one of the main tributaries of Manila Bay. Its waters come from three (3) sources: the upper Marikina River System; the San Juan River System; and the Laguna Lake. Trash that is thrown upstream and midstream of the river system, when left uncollected, end up in Manila Bay and contribute to its degradation.

DENR is leading efforts to clean, rehabilitate and preserve the Manila Bay. Its success, however, is largely dependent on the active participation of all barangays of Metro Manila in keeping their waterways trash-free. 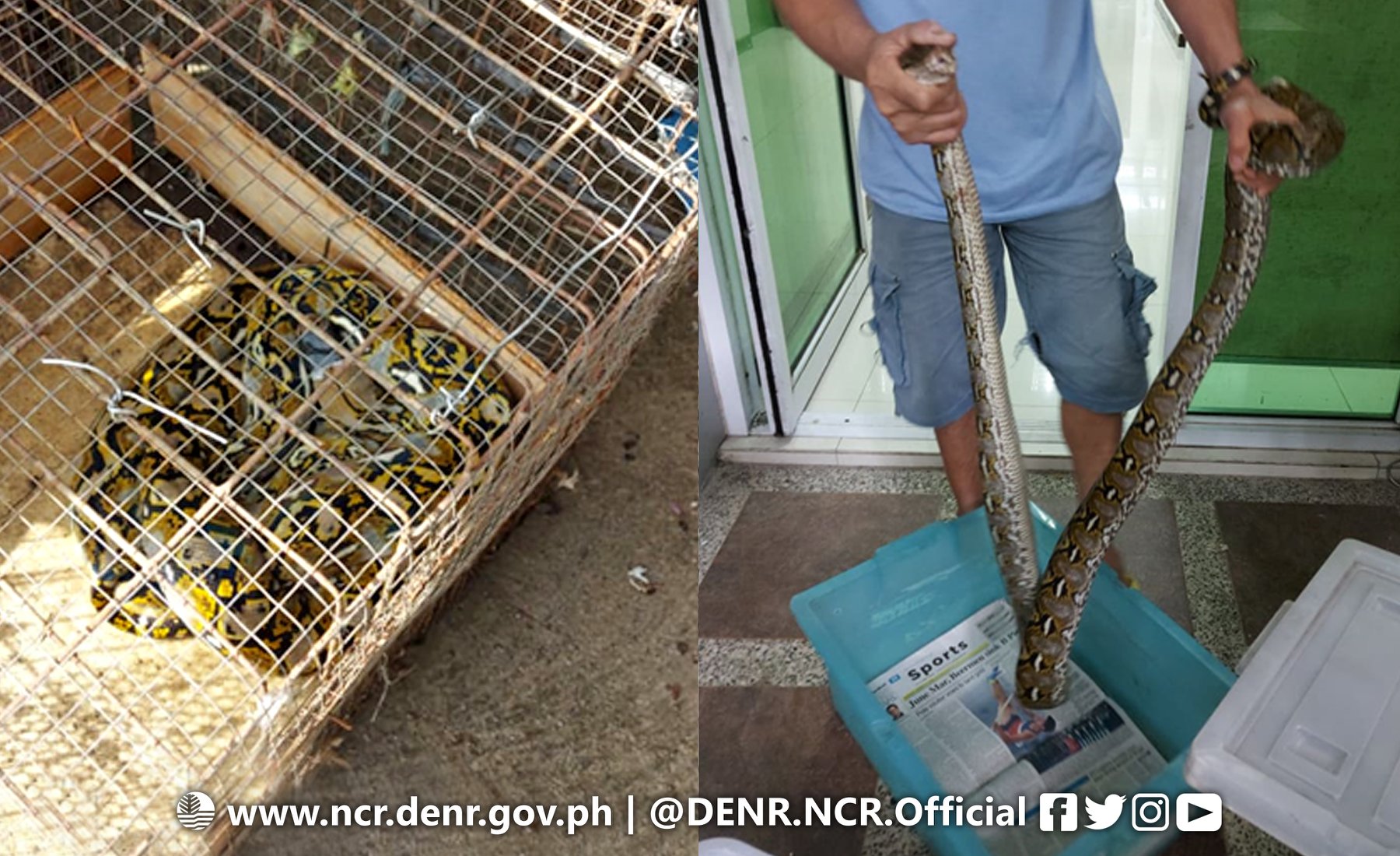 The snakes were captured by residents of said places and turned-over to their barangay who, in turn, coordinated with the NFO for their safe retrieval.

Reticulated pythons are native to the rainforests of Southeast Asia and are considered one of the longest snakes in the world. It lives in rain forests, woodlands, grasslands, rivers and nearby streams, and lakes. Its conservation status is currently listed as Least Concern by the International Union for the Conservation of Nature (IUCN) because of its wide distribution.

The snakes were both turned over to the Wildlife Rescue Center (WRC) of the DENR-Biodiversity Management Bureau (BMB) in Quezon City for rehabilitation and possible release back in the wild. 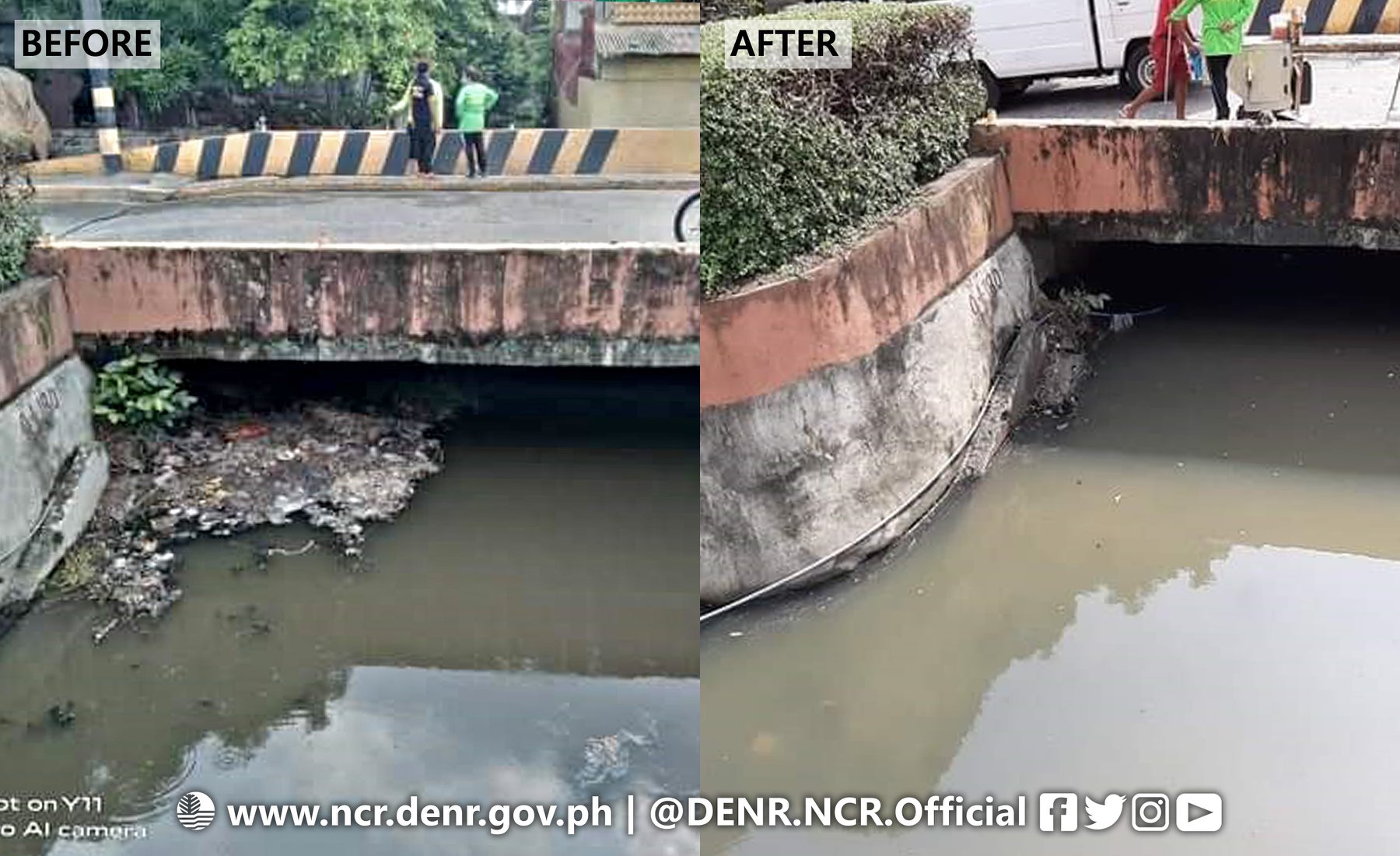 A team of workers from Barangay San Antonio in Makati City conducted a cleanup in Calatagan Creek and were able to remove an estimated 15 sacks of solid waste that has accumulated on its banks on Friday, 14 August 2020.

Calatagan Creek is part of a drainage network that ran across several barangays of Makati City, including the exclusive villages of Forbes Park, Bel-Air, Urdaneta, and San Antonio. It is connected to Estero Tripa de Gallina and flows out to Manila Bay via the Pasig River or Paranaque River, depending on the prevailing tides. Trash that is thrown in the waterway and left uncollected will reach Manila Bay and contribute to water pollution.

DENR is currently leading efforts to clean, rehabilitate and preserve the Manila Bay—and is calling on all stakeholders, especially barangays along waterways, to participate in the responsibility of maintaining a trash-free esteros under their administrative jurisdictions. 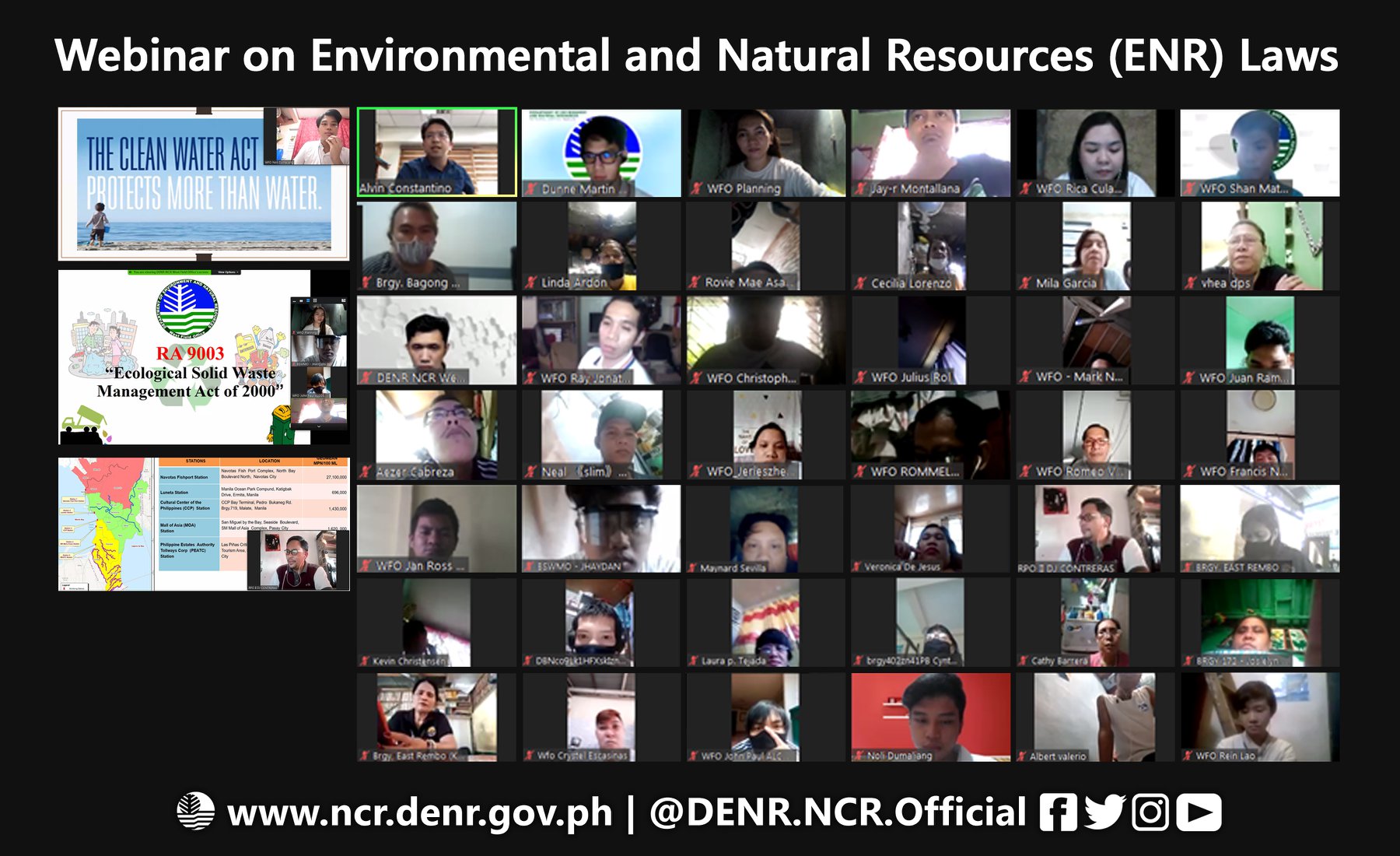 Officials and representatives of barangays along the waterways participated in the online learning event aimed at orienting them on their role in the implementation of ENR laws at their level. Sangguniang Kabataan officials likewise participated in the event.

WFO is one of the four Field Offices of DENR National Capital Region established under Department Administrative Order (DAO) No. 2019-02. It has administrative jurisdiction over the cities of Manila, San Juan, Mandaluyong, Makati, and Pasay. The offce is closely coordinating efforts to clean, rehabilitate and preserve the rivers, esteros, and other waterways with the local government and other private and civil society organizations within their area of jurisdiction, in keeping with the ridge-to-reef approach that DENR has adopted in for the rehabilitation of Manila Bay.