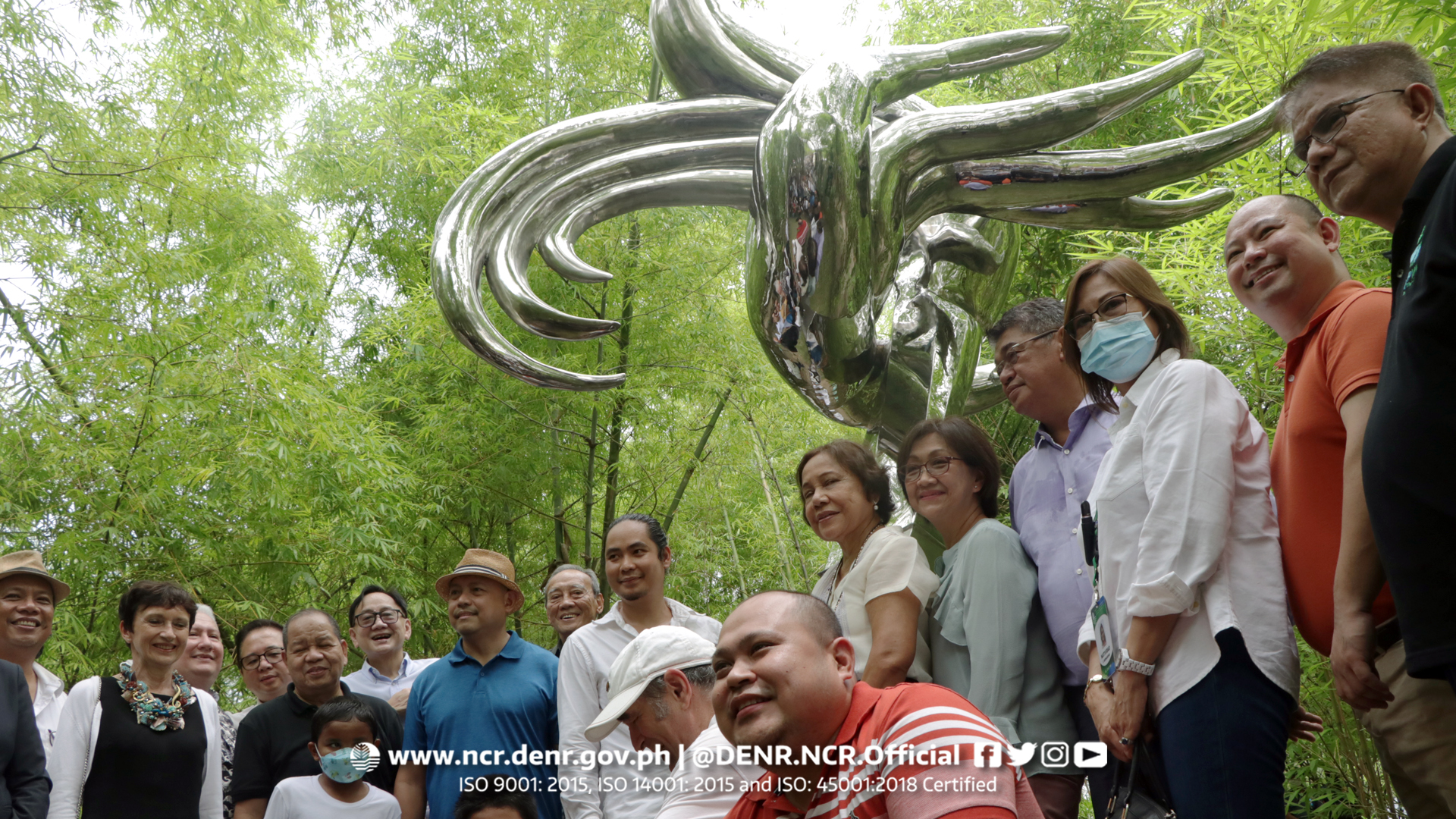 Senator Cynthia Villar and her counterpart, French Senator Samantha Cazebone, and French Ambassador to the Philippines Michele Boccoz, celebrated the 75th anniversary of the diplomatic relations between the two countries at the Las Piñas-Parañaque Wetland Park (LPPWP) on Sunday, 26 June 2022.
Together, they led the unveiling of a sculpture named “Intertwined” to commemorate the Inauguration of the Philippines-France Friendship Day. Villar said she is pleased that the celebration was held at LPPWP, one of the 8 Ramsar sites or wetlands of international significance of the country. LPPWP, she adds, is also one of the two protected areas in Metro Manila under the Expanded NIPAS Act of 2018 which she authored. “The event gives me an opportunity to once again thank the French community here in the Philippines, particularly the ‘Together Ensemble Foundation’ in partnering with the LPPWP Protected Area Management Board (PAMB) since last year to further maintain and preserve this wetland park”, Villar said.
The lawmaker sits as a member of the LPPWP PAMB, the body tasked with overseeing the management of LPPWP. Villar noted that the relations between France and the Philippines have always been strong and extend far back than 1947, the year the Treaty of Amity was signed by the two nations in Paris. She said that formal diplomatic relations aside, “the French’ joie de vivre (enjoyment of life) and the Filipinos’ hospitable nature” is what really strengthened the bond between the Philippines and France over the centuries.
For her part, Ambassador Boccoz said the choice of LPPWP as the venue for the event “is all the most valid as France and Philippines share the importance they attach to protect the environment and biodiversity.”“France remains one of our country’s largest trading partners and investors from the European Union (EU) with most of the investments going into private services, electricity, gas, water, and manufacturing industries,” Villar explained.
France has been making important contributions too in the area of rural development. The senator cited the work of the late French priest Father Yves Caroff with the Oblate Galilee Farm Malangag, in Antipas, Cotabato as an inspiration for her filing of Republic Act No. 10816 or Farm Tourism Development Act of 2016. Said law, according to Villar, aims to help augment the income of farmers and boost the country’s agriculture by supporting the development of farm schools and farm tourism.
The event was organized by DENR National Capital Region’s LPPWP and Protected Area Management Office (PAMO) in partnership with Together-Ensemble Foundation Inc., and Villar Sipag Foundation.DENR National Capital Region Regional Executive Director and concurrent LPPWP PAMB chair, Jacqueline A. Caancan, welcomed all the guests and participants of the event. They include DENR Assistant Secretaries Gilbert Gonzales (Field Operations - Luzon and Visayas) and Hiro V. Masuda ((Human Resources, Strategic Communication and Sectoral Initiatives), DENR Directors Al O. Orolfo (Foreign Assisted and Special Projects Service), Natividad C. Bernardo (Biodiversity Management Bureau), and Khalil S. Bayam (Strategic Communication and Initiatives Service).
Asec. Gonzales delivered the message of DENR OIC Secretary Joselin Marcus E. Fragada who was at another equally important event. DENR National Capital Region Assistant Regional Directors Manuel T. Escasura (Management Services) and Engr. Ignacio R. Almira Jr. (Technical Services) and representatives from the Toxic and Hazardous Wastes Research, Development and Extension Center (THWRDEC) of the DENR Ecosystems Research and Development Bureau (ERDB) were also there to receive the French delegation.