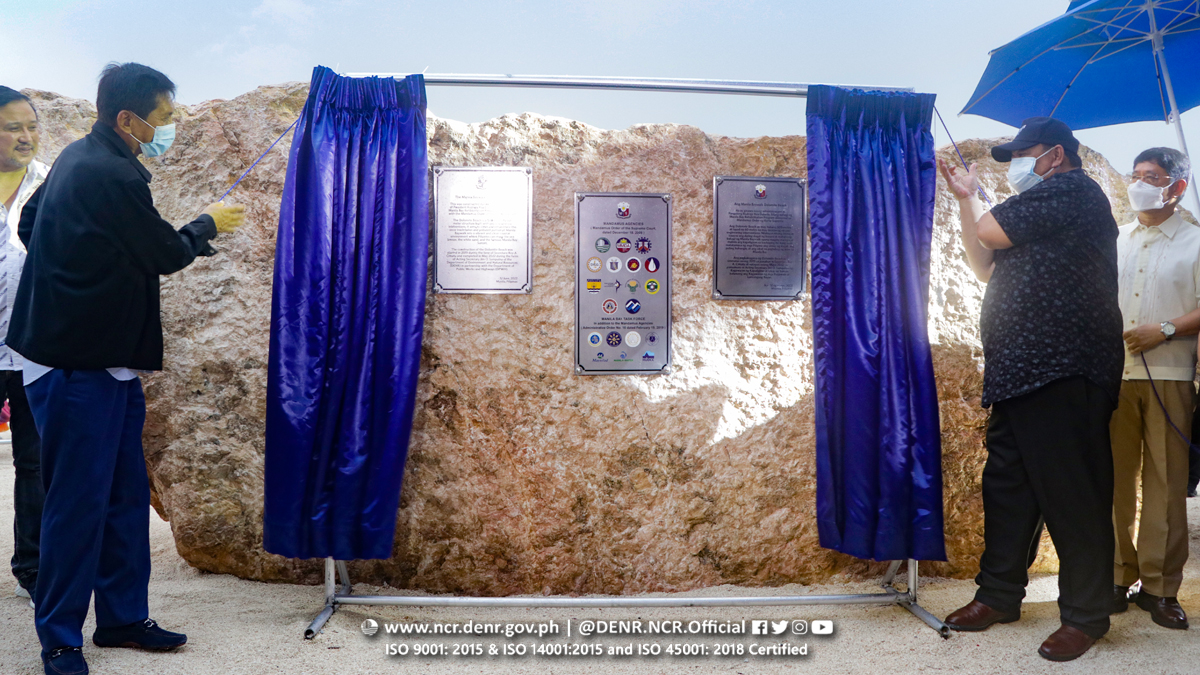 Hundreds of Filipinos joined the Department of Environment and Natural Resources (DENR) the reopening of the Dolomite Beach along Roxas Boulevard in Manila on Sunday, 12 June 2022.
The 500-meter beach area was formally opened to a cheering crowd after a brief ceremony that saw the unveiling of a stone marker commemorating the event. DENR Secretary Jim O. Sampulna, together with his predecessor, former Secretary Roy A. Cimatu, DILG Secretary Eduardo M. Año, and representatives of mandamus agencies, led the unveiling of the stone marker that featured an image of the baywalk area before and after it was developed by DENR.
In his speech, Sec. Sampulna assured the public that the crushed dolomite used in the beach is safe.“By now, contrary to the earlier claims of critics, it should be clear that dolomite sand is not harmful to people and natural ecosystems. Dolomite is widely used for beach nourishment in many countries such as Singapore, France, Portugal, South Korea, the United Arab Emirates, and the United States of America,” he said.
Sec. Sampulna also revealed that the amount of fecal coliform bacteria found in the waters fronting the beach area has significantly decreased, from millions most probable number (mpn) per 100 milliliters in 2019 down to 920 mpn/100 ml according to the latest water quality monitoring results. Manila Bay is categorized as “Class SB” according to the DENR Environmental Management Bureau (EMB). The safe level for fecal coliform in Class SB waters like Manila Bay is set at 100 mpn/100 ml under DENR Administrative Order No. 2016-08.
“While the waters remain unsafe for now, test results indicate that we are winning the battle for Manila Bay”, Sec. Sampulna said. Prior to the opening of the beach, Sec. Sampulna and other government officials first unveiled a World War II Heritage Cannon near the Manila Yacht Club. The canon, according to DENR Undersecretary Jonas R. Leones, used to be in Fort Drum Island, also known as El Fraile, at the mouth of Manila Bay in Corregidor. Usec. Leones said the Heritage Cannon was installed to “encourage patriotism” and remind the public that the “battle to cleanup Manila Bay is not yet over.”
Apart from Usec. Leones, other top executives of the DENR showed up to support the reopening of the Dolomite Beach in time with the celebration of the 124th anniversary of Philippine Independence. The Dolomite Beach will be open from 6AM to 6PM every day. Access is free but swimming and littering in the area is strictly prohibited.