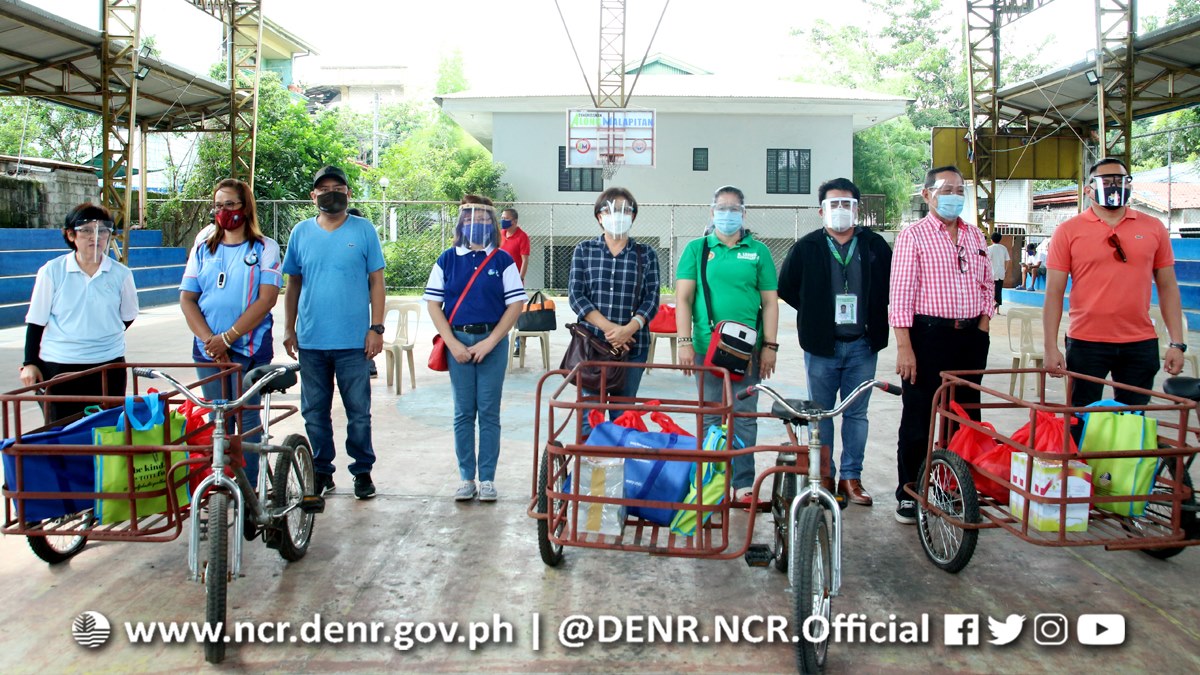 The Department of Environment and Natural Resources (DENR) distributed bicycles with sidecar to barangays along Tullahan-Tinajeros River on Wednesday, 16 September 2020.

Known as “padyak” in Metro Manila, the bicycles—which have been equipped with two-by-three feet sidecars—were given to help barangays collect garbage from communities not accessible to dump trucks because of narrow streets or alleys.

According to DENR Secretary Roy A. Cimatu, garbage from these communities, when left uncollected, will accumulate over time and reach in Manila Bay. “The accumulated uncollected wastes do not only pose health risks to the communities but also clog canals, causing flooding in these areas. Uncollected garbage also ends up in coastlines and waters of Manila Bay,” Sec. Cimatu added.

To prevent this from happening, the DENR, through the offices of DENR Undersecretaries Jonas Leones and Analiza Rebuelta-Teh, and DENR National Capital Region, identified 10 barangays within the Tullahan-Tinajeros River System that have a relatively high number of informal settler families and areas that are inaccessible to garbage collection trucks. These are Barangays 160, 162 and 163 in Caloocan City; Potrero, Catmon, Tinajeros, and Maysilo in Malabon City; Ugong and Marulas in Valenzuela City; and Sta. Lucia in Quezon City.

Undersecretaries Leones and Rebuelta-Teh, together with DENR-NCR Regional Executive Director Jacqueline Caancan, led the turnover of bikes to the barangay beneficiaries. Aside from the bicycles with sidecar, the barangays also received educational materials on climate and environmental protection, including UNICEF-assisted climate change flip charts and children storybook entitled “Ang Paglalakbay nina Niño at Niña,” and hygiene kits in support of the campaign against COVID-19.

The turnover ceremony also forms part of the local celebration of the International Coastal Cleanup (ICC) Day on Saturday, 19 September 2020, with the theme “Safe Oceans Start at Home.” In keeping with the ICC theme, Director Caancan called on Metro Manilans who want to participate in the event to do their cleanup in the safety of their home and communities and to use Ocean Conservancy’ Clean Swell app in recording and submitting their cleanup data.  “If we want to help in the cleanup of our coastal waters and Manila Bay, it is best that we start in our own houses by practicing waste reduction and segregation. That way, we lessen the amount of trash that ends up in Manila Bay”, Director Caancan advised.