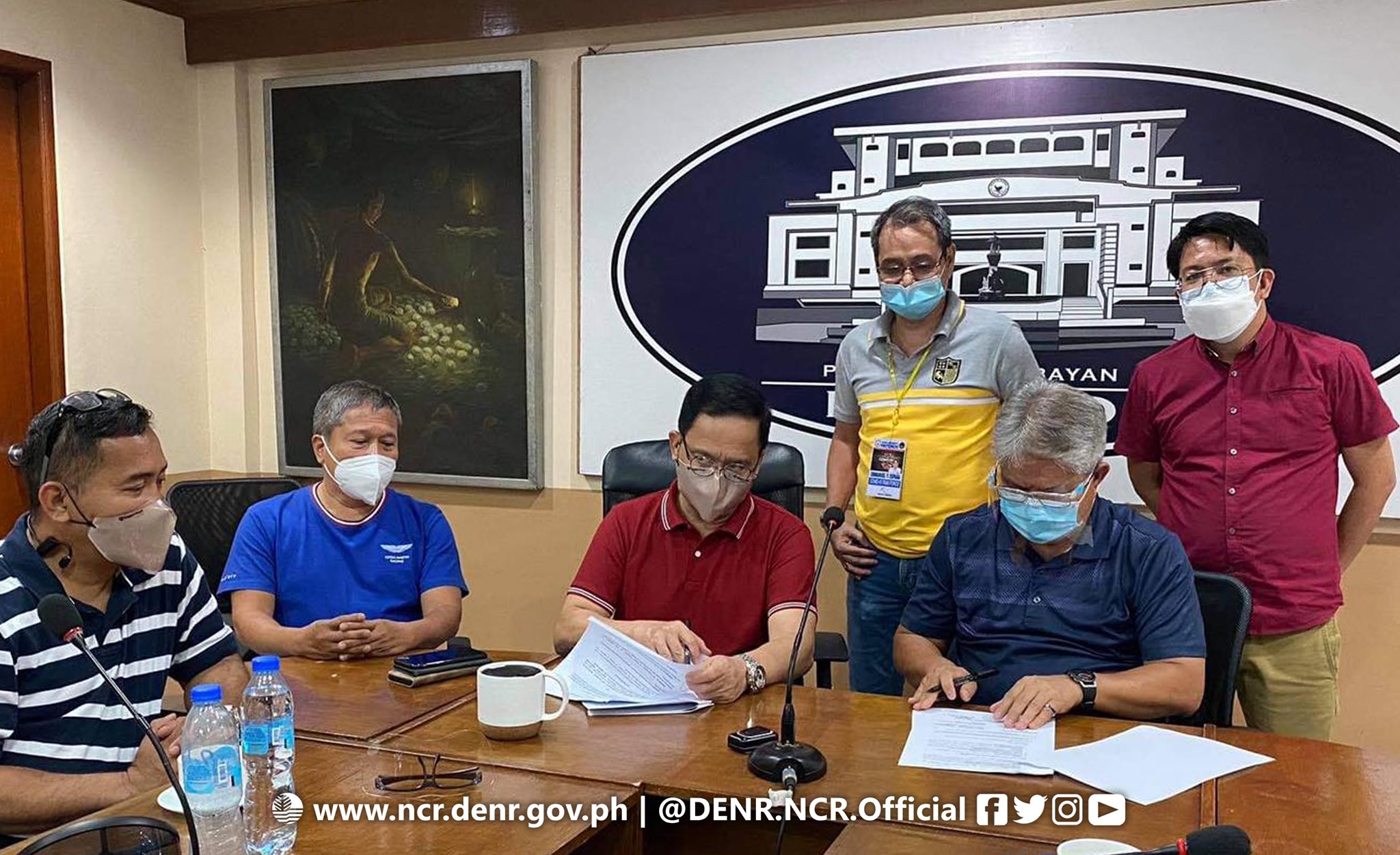 In celebration of Handog Titulo Month, DENR National Capital Region, and the Municipality of Pateros signed on Wednesday, 23 September 2020, a Memorandum of Partnership Agreement (MOPA) on public land titling.

Under the agreement, the DENR National Capital Region will help and provide technical assistance to the municipal government of Pateros enabling it to create a Land Management Office that would handle the development, administration, and management of its land resources. The municipal government, on the other hand, agrees to facilitate the public land titling programs of the regional office in Pateros which include, among others, Rapid Land Tenure Appraisal (RLTA).

RLTA is a mechanism to fast track the process and issuance of land titles, in keeping with DENR Sec. Roy A. Cimatu’s program to ensure the security of land tenure and spur economic activity from land-related transactions.

The DENR-LGU partnership in public land titling is according to Department Administrative Order (DAO) No. 2011-06 and Republic Act No. 10023 or the Residential Free Patent Act. 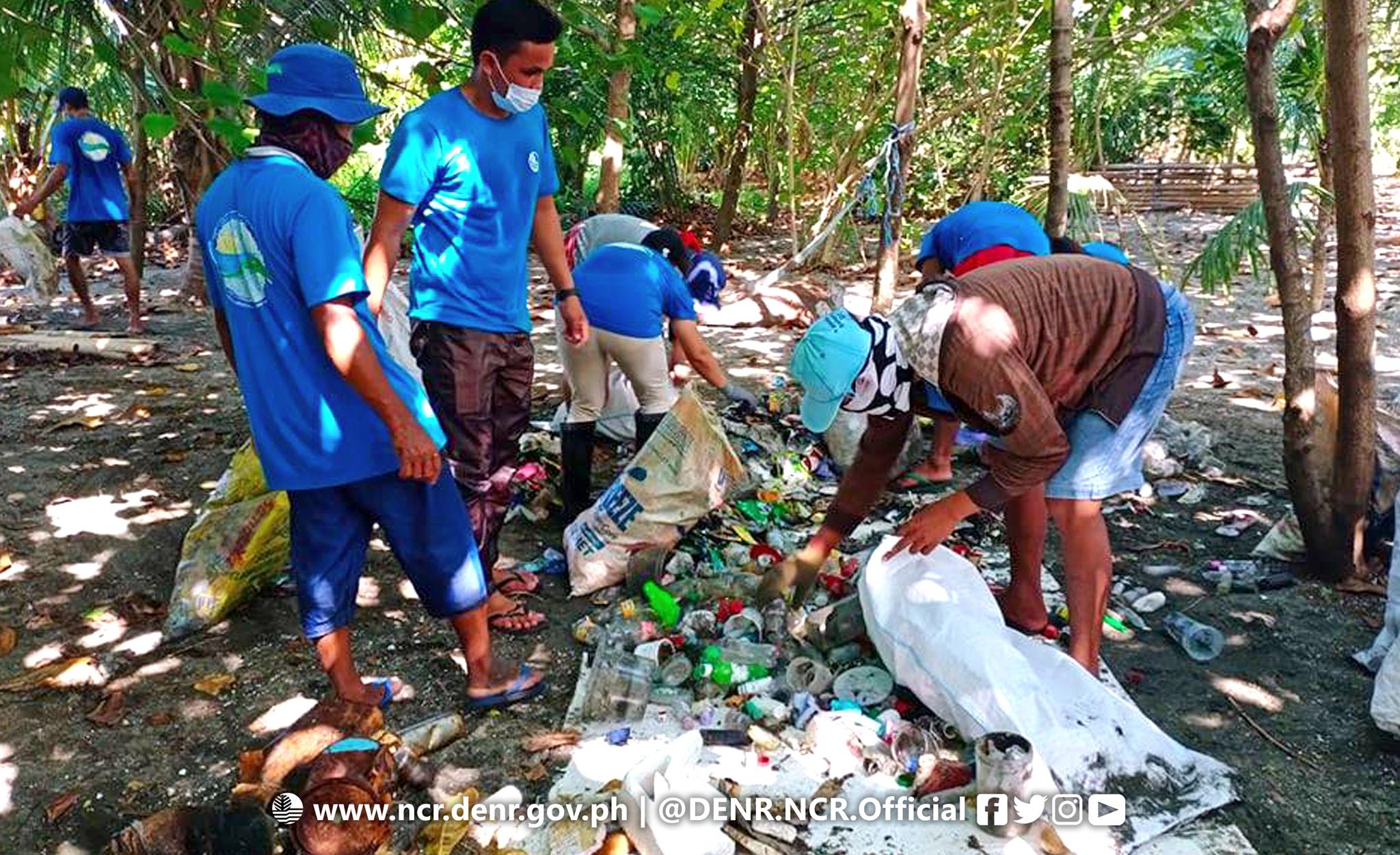 Personnel of the Coastal Resources and Foreshore Management Section (CRFMS) gather and segregate all the trash they have collected on the shores of the Navotas Marine Tree Park (NMTP) in Barangay Tanza, Navotas City.

Each type of trash is counted and recorded using the Clean Swell app developed by Ocean Conservancy to collect all cleanup data around the world during the celebration of the International Coastal Cleanup (ICC) Day. The cleanup data will be compiled and made available to the public to provide them a snapshot of the trash that pollutes our oceans. The waste audit data from the International Coastal Cleanup (ICC) were being collated together to come up with studies and interventions on the marine debris problem. 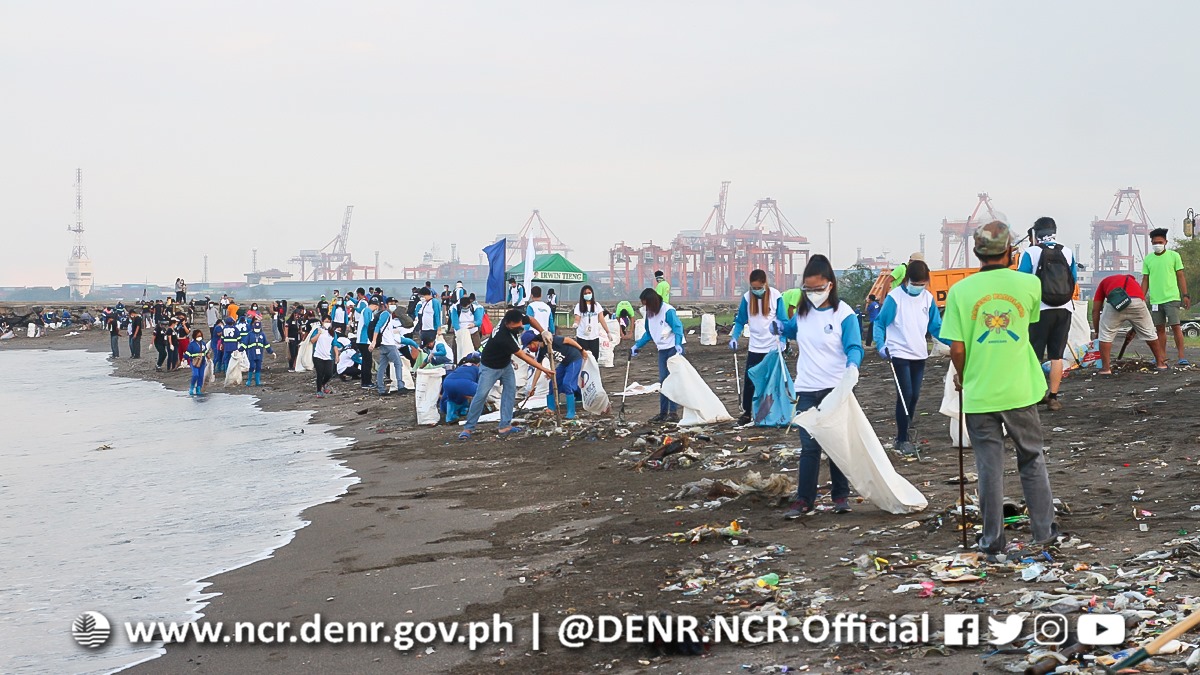 The effort resulted in the removal of more than 200 kilograms of trash on the 700 meter stretch of the beach area. While some of the trash did come from the residents of the area, the majority of the recovered trash comes from inland sources, washed ashore only by the combined action of wave currents and changing tides.

As Baseco sits at the mouth of Pasig River, a tidal estuary that stretches more than 25 kilometers long, it receives waters from sources as far as the Sierra Madre Mountain Ranges in Rizal Province. The entire river system drains not only the north-eastern (via the San Juan and Marikina River system) and south-eastern part of Metro Manila but parts of Rizal and Laguna Province as well through the Manggahan Floodway and Laguna de Bay.

When residents of the cities and municipalities traversed by the Pasig River become negligent of the trash they generate, this trash, which usually ends up in canals and esteros connected to the river system, reach Baseco beach and other parts of Manila Bay in time, contributing to its further deterioration.

The cleanup thus of Manila Bay, according to DENR-NCR Regional Executive Director Jacqueline A. Caancan “should start inside our homes and not the other way around”. “We need to be mindful of the waste we generate at home and find ways of reducing them because no matter how many cleanups we do on the shores of Manila Bay and its tributaries, we need to understand that these interventions won't do so much until we decide to tackle the issue of waste at its source, and that is our homes and the lifestyle we have adopted”, Director Caancan said.

To celebrate the ICC this year, Director Caancan instructed all officials and employees of the regional office who are at home to do an inventory and analysis of the waste their household generates. “We need to know how much waste our household generates, as well as the type of waste we create daily so we can strategize on ways to lessen our contribution to the pollution of Manila Bay”, Director Caancan said.

The results of the waste analysis and characterization (WACS) of the officials and employees at home will be submitted to Ocean Conservancy and shall form part of the cleanup data of the region. “Safe Oceans Start At Home” is this year’s theme for the ICC 2020. 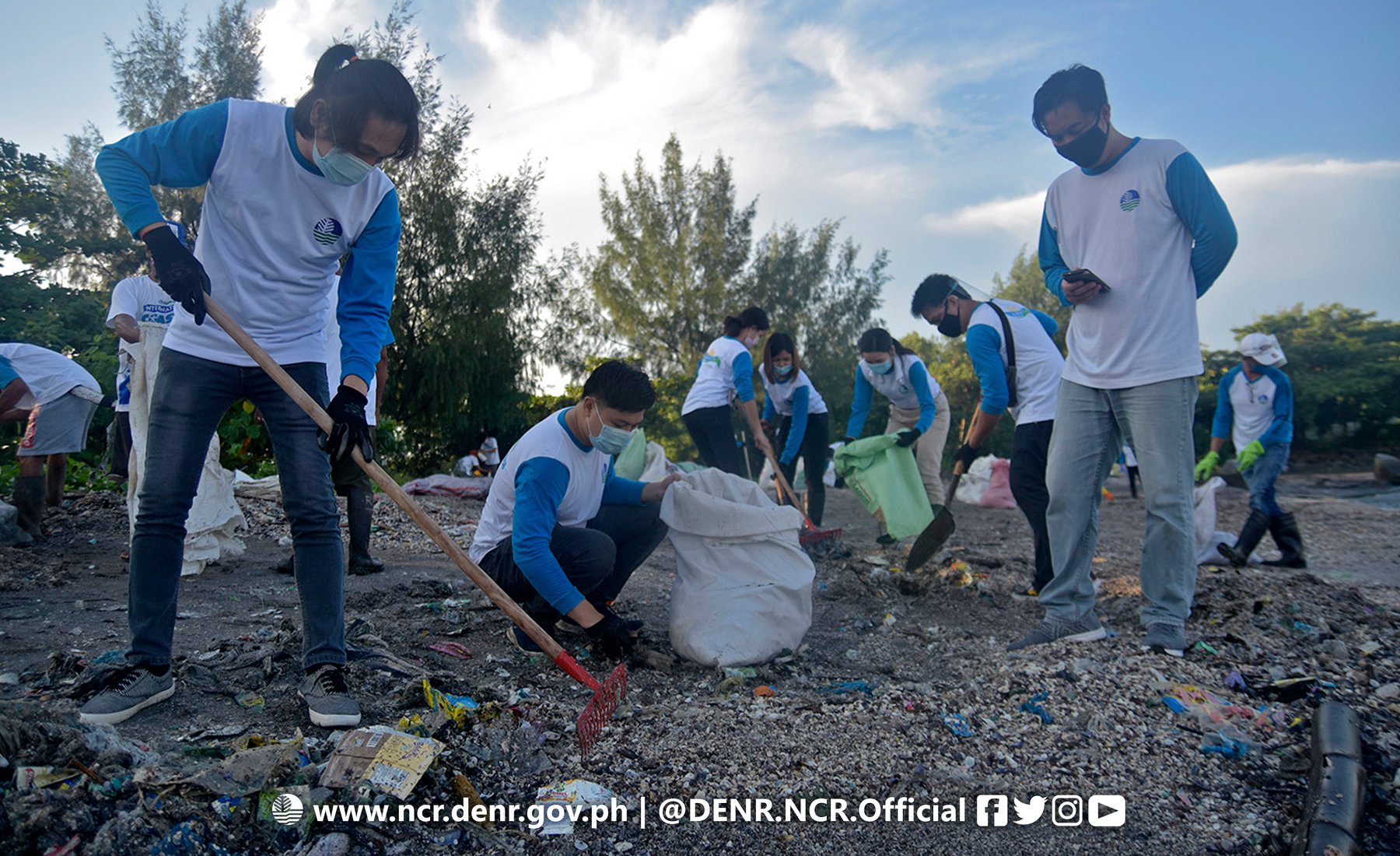 The ICC is an annual activity that normally draws thousands of volunteers. It is a simultaneous cleanup of all waterways that connects with the ocean. The DENR National Capital Region leads the celebration of ICC in Metro Manila. However, in compliance with existing public health and safety protocols, DENR-NCR Regional Executive Director Jacqueline A. Caancan limited the participation of volunteers only from the selected DENR-NCR employees.

“Much as we wanted to accommodate numerous requests from private organizations and institutions to join the cleanup at LPPWP, we decided to put a premium on public health and encouraged our partners to do their cleanup in their homes or communities instead ”, Director Caancan explained.

Director Caancan also directed all officials and employees of the DENR-NCR who are at home to conduct a cleanup and analysis of the waste their household generates and submit the results to the Ocean Conservancy using the Clean Swell app.  The trash that we usually find on the shores of Manila Bay come from our houses, Director Caancan pointed out. “If we want to participate in the cleanup of our oceans and Manila Bay, the best way to do so is to start at home. We must educate the members of our household to practice waste reduction and proper management of wastes that come from our houses”, Director Caancan added. “Safe Oceans Start At Home” is this year’s theme for the ICC 2020. 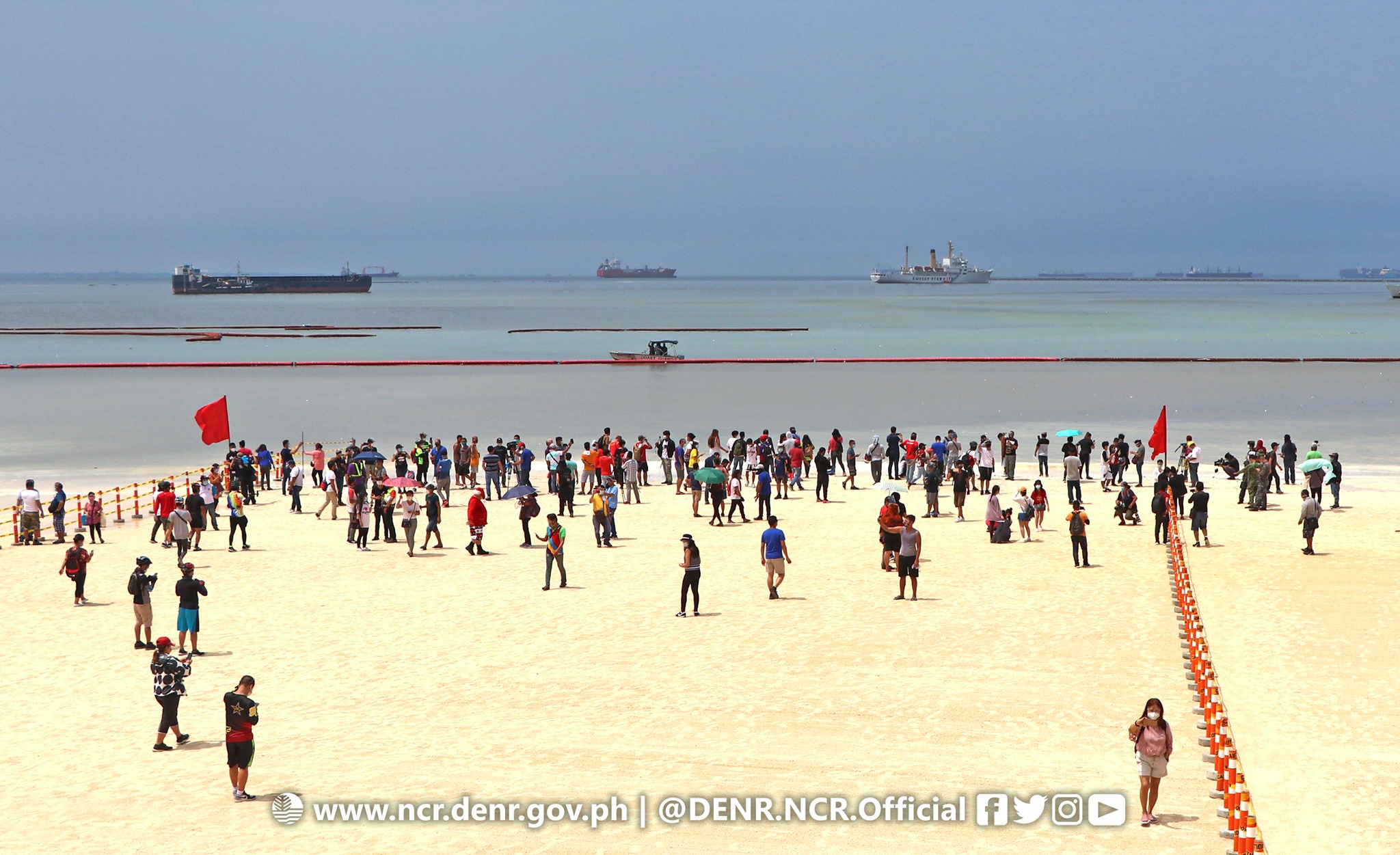 Throngs of people from different walks of life enjoyed the view of the Manila Bay beach nourishment area along Roxas Boulevard in Manila as it was temporarily opened to the public from September 19-20, 2020.

People eagerly line up and wait for their turn to have a 3-5 minute walk and view of the Manila Bay beach nourishment area. Personnel from the DENR-NCR West Field Office were on-site to facilitate entry of the visitors per batch.

DENR Undersecretary Benny Antiporda said that the phase 2 composing 380 meters of the Manila Bay beach nourishment will continue after the 2-day temporary opening of the area to all people.